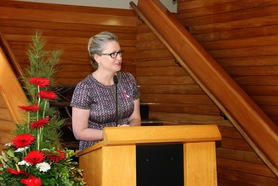 On 6 April 2014 the Polish Ambassador to New Zealand, Beata Stoczynska, unveiled a plaque at Baycourt Arts & Community Centre in Tauranga. It is dedicated to Polish Romantic-era composer Fryderyk Chopin, and it is one of a number of plaques unveiled throughout New Zealand as part of the Polish Embassy's project Polish Trails in New Zealand.

The event concluded with four pieces of Chopin music, among them two styles most frequently associated with Poland: a Mazurka and a Polonaise.

A five-minute video of the event including Magdalena James playing the piano can be viewed here.
Powered by